Fragrant basmati rice layered with spicy and delicious beef curry, I mean what could be better than that, right? However, do you feel daunted to make it biryani at home? Well, not anymore. Learn how to make my favourite Pakistani Beef Biryani at home today, with easy step by step photos and tips. Also try these delicious Pakistani recipes: Hariyali Chicken and Chicken Malai Tikka Boti.

Btw, we LOVE our rice at I Knead to Eat so if you’re a rice lover like us, you’ll love these Chana Pulao and Lebanese Rice Pilaf with Vermicelli recipes.

What is Biryani? And is it spicy?

Let’s talk about Biryani and why it’s lovely, shall we? Biryani is a popular layered rice and meat dish that’s loved across all over India and Pakistan.

Biryani has two main components: fluffy, fragrant basmati rice and a delicious saucy beef (or your choice of protein) curry or masala. AND, it’s super delicious.

It’s also what I would say the equivalent of Sunday roast in Pakistan, as it’s almost always made once a week either on Friday (mostly) or Sunday in most households in Pakistani. And usually when Biryani is in the making, Zarda a sweet rice recipe is also made on the same day as dessert. It is a lovely and popular combination.

Biryani is also quite a popular recipe made on special occasions such as Eid.

It’s spicy depending on the type of biryani you’re eating, but yes generally biryani is supposed to be on the spicier side.

However, if you’re not tolerant of high spice levels, then of course you can reduce the amount of spice used in this Beef Biryani recipe. We don’t eat very spicy food at home either, so I make a milder biryani at home.

There are SO many types and variations of biryani across the region of Pakistan and India:

And even vegetarian biryani!

There are also different methods of making biryani too, layered rice and meat curry (we’re making this today) and dumpukht biryani where the uncooked meat masala is layered with rice and cooked in a sealed clay pot on low heat for hours.

Whatever type of biryani you’re making, I can guarantee that they’re all super delicious!

What kind of rice is the best for this recipe?

In Pakistan, the most popular rice that’s used to make biryani is ‘sella’ basmati rice. However, I almost never have sella rice at home, so I just use a good quality long grain basmati rice for my beef biryani.

Can you use ready-made Biryani Masala (spice mix) or Not?

You could use homemade Biryani masala, but these days Shan Biryani Masala is so readily available and gives an authentic taste. So I recommend using a readymade spice mix, as it just makes the cooking process a little easier.

Can I use chicken instead beef?

Yes, absolutely! The cooking time for the meat masala will be less though, as chicken cooks faster than beef.

To add potatoes or not?

There’s a huge debate in Pakistan whether Aloo (potatoes) belong in biryani or not. I’m a huge proponent of adding potato in biryani, because it soaks up the beautiful masala curry flavour and it’s all yummy yum!!

How to Prepare Authentic Beef Biryani at Home

Beef Biryani is super easy to make and while it may seem many steps are involved, I can guarantee you that they’re all totally worth it.

So let’s get down to making Beef biryani step by step, shall we?

Beef Biryani is comprised of three cooking steps: the beef masala, the rice, and the final topping and assembling of biryani.

Start by frying thinly sliced onions in the pressure cooker until they are a deep golden brown. Add in the beef along with the ginger garlic paste.

Saute on high heat until the beef changes color.

Cook on high heat, while stirring, for about 5-7 minutes.

Now add the water (beef should be submerged in water) and pressure cook until the beef is cooked through. This may take about 15-20 minutes depending on the cut and type of beef you’re using.

After the beef masala is ready, set it aside while you make the rice.

Biryani rice is special because A.) We add some fragrant spices to make it all biryanilicious B.) It needs to be parboiled (not fully cooked)

In a large pot, bring the water to boil. Add the water with the spices and boil until the rice is just cooked i.e. par boiled or as we say in Urdu aik kani. The rice is ready when you press it between your thumb and index finger and it’s not completely mushy in the middle. It should be al dente.

It’s important to not overcook the rice at this point, because when its cooked in steam, it will overcook and become mushy.

Once the rice is ready, drain it in a colander.

Layering the Rice and Assembling

In a separate large pot, layer half of the rice. Then add the beef curry, and top with sliced lemon and chopped coriander.

Cover with the remaining rice.

Drizzle over the milk, and some yellow food colouring mixed with water.

Drizzle with melted ghee or butter.

Cover and steam cook on low flame for 8-10 minutes until the rice is fully cooked.

Mix the biryani carefully and serve with raita.

Biryani is usually served with some sort of cooling raita or salad. Here are some delicious options that pair really well with Beef Biryani:

Greek Salad (This one is a bit out there, but seriously do give it a try!)

Pair it with these delicious Desserts

Zarda Rice (seriously SO good and most popular pairing with Biryani) 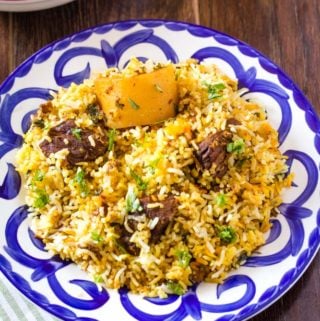 For the topping / dum 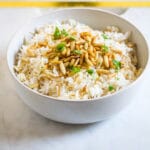 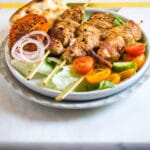 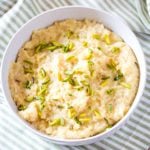 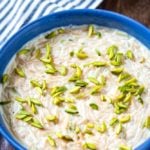